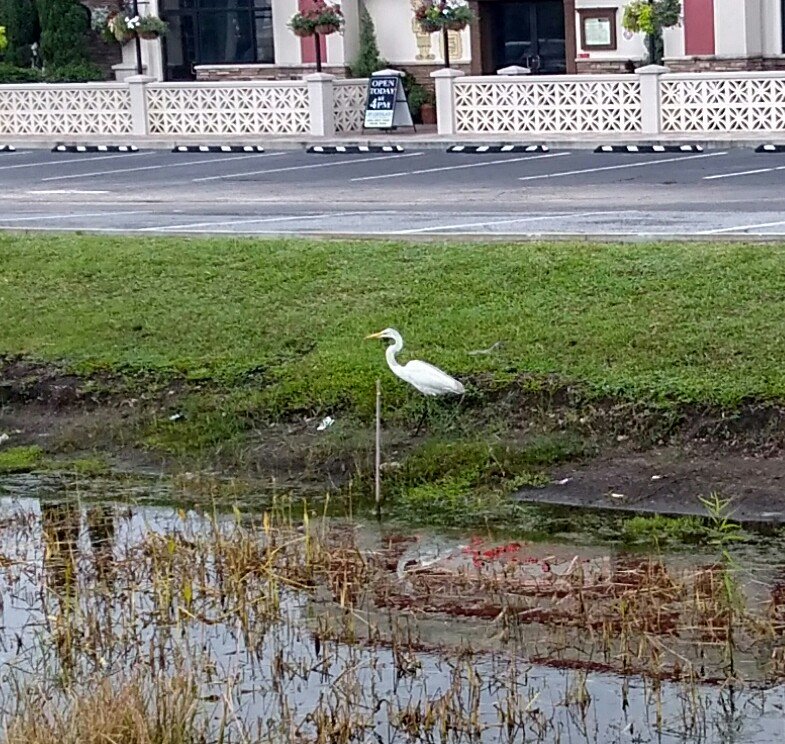 I purposefully walk over to the Convention Center every morning from my hotel about a half mile away. I welcome the exercise and the chance to breath unfiltered air no matter how hot. There is a ditch beside the sidewalk filled with litter but also containing its own miniature ecosystem. There is an egret standing nobly beside the ditch every day, without anxiety or fear, undaunted by the climate, oblivious to human aims and objectives being pursued nearby. Feeling completely at home. Totally loved.

Wednesday I attended a morning session on the resolution coming before the Delegates this afternoon regarding Israel-Palestine. This was a controversial resolution at the last convention in Kansas City (2015) where it was tabled for revisions. So the revised version comes before the delegate assembly this morning.

The Palestine-Israel Network (PIN) has been working hard to educate and promote the resolution across the country. For example, North Suburban sponsored a visit by Palestinian Christian activist Jonathan Kuttab this spring at Reba Place church in Evanston. But there have been Convention attendees claiming membership in PIN handing out literature against the resolution. This feeds the concern that a thoroughly Anabaptist, peace-oriented resolution to address this conflict might be too much to ask of this body.

The choice between being pro-Israel or pro-Palestinian is precisely the false binary this resolution is seeking to transform. An afternoon session with Jonathan Kuttab and Rabbi Brant Rosen helped clarify the resolution from a perspective that is thoroughly Anabaptist, realistically nonviolent, pro-Jewish but anti-Occupation. Rabbi Rosen told how, in his own American Jewish religious education criticism of Israel was always equated with anti-Jewishness (which is the core of “anti-Semitism”). This was also taught in many Christian homes. However, it is not prejudice, bigotry, or even racism that pose the greatest threat to Jews, Palestinians, or anyone else. It is “state-sanctioned” racism that is the real danger—when the structures, bureaucracy, and trajectory of a state target specific populations for oppression.

Opposition to apartheid in Israel is neither anti-Jewish, pro-Palestinian or for that matter anti-American any more than the anti-apartheid work of Dr King or Rosa Parks was anti-American. It is peacemaking pure and (not so) simple. By the end of today, we will know which message goes forth from this Convention. [UPDATE: Allotted two hours for processing in table groups the resolution passed by an overwhelming 97% vote!]

The Wednesday afternoon Inclusive Worship service sponsored by Pink Menno and the Supportive Communities Network was a beautiful, inspiring worship event. Well attended, with a large representation from the Youth Convention, there was a clear affirmation of the Convention theme (“Love is a verb”) and the necessity of extending that love to all of God’s creation—all of God’s creatures. I was very moved by the commemoration of the mass shooting at the Pulse Nightclub in Orlando in 2016—both the deadliest mass shooting by a single shooter and the deadliest incident of violence against LGBT people in United States history. In a “Naming Ritual” we recited the names of each victim. I was heartbroken to hear stories of parents who refused to claim the bodies of their children at the morgue for fear their children were gay. According to the coroner this happens regularly. How can this be of God?

I am typing at a table outside the Valencia Ballroom where we meet for worship. At a table next to me, there is a cluster of Mennonite delegates speaking of their fears and concerns for the future of the MCUSA. Listening to them, I hear almost everything that I affirm about this Convention being the focus of their anxieties. What will the next three days unfold for our denomination?

In family systems, we talk about being a non-anxious presence: differentiated but relational. That’s the reminder I take with me as the Delegate Sessions begin in the next hour.

Fear is a verb.