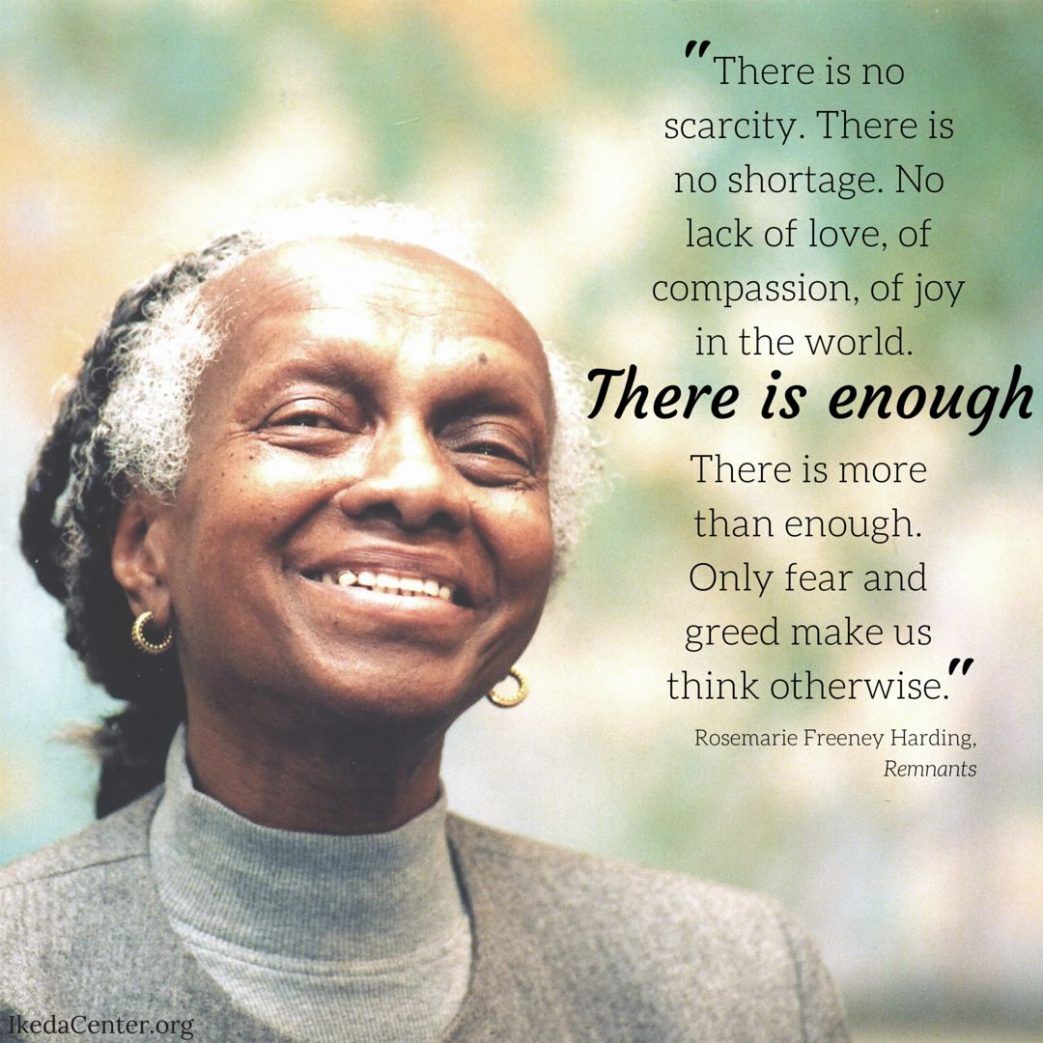 For this week’s Pastor’s Corner I want to post a book review written in 2015. Mother’s Day is approaching on May 14 and it is a good time to reflect upon “Spirit, activism, and mothering” as in the subtitle of this marvelous book about a marvelous woman of God.

Near the end of this utterly unique mother-daughter memoir, Rosemarie Freeney Harding (1930-2004) writes: “Grandma Rye and those old Africans put something in the ground. When they got here, they stepped off those boats, chained up and weary. They looked around at this new land and they could see the heartbreak and suffering that were waiting for them and their generation. They saw these traumas waiting for us here. And they knew we were going to need something strong. Some medicine. Some spirit medicine to carry us through these storms.”

Remnants: A Memoir of Spirit, Activism, and Mothering is a record of Harding’s journey, the journey of a generation, in drawing upon that spirit medicine as a resource for healing and transformation. Harding is perhaps not as well known as her husband Dr. Vincent Harding (1931-2014) and yet this volume is a testament to the individuality of her creative imagination, her deep mystical spirit, and the core of her sacred activism. She was an organizer, teacher, social worker, and co-founder of the Veterans of Hope Project at the Iliff School of Theology.

The book is both autobiography and biography. Daughter and co-author Rachel Elizabeth Harding (Professor of Indigenous Spiritual Traditions, University of Colorado, Denver) notes the “voice of the text is now a mixed utterance.” Rachel drew upon her mother’s journals and other writings as well as many hours of taped conversations. She has woven her own words and her mother’s into a seamless flow that maintains a unified, distinctive voice. In Rachel’s words her mother modeled a “female-centered, indigenous wisdom about the world.” It is the elucidation of that indigenous, African wisdom contextualized in a contemporary North American environment during a cauldron of social, cultural, and political turmoil that makes the testimony in this volume illuminating and indispensable.

The book begins with the ancestors of Rosemarie Freeney in southern Georgia. It is in that soil and from that people that her own way of being in the world was formed. Rosemarie was born after her family had migrated to Chicago in the 1920s. The memoir describes her growth among a loving family of southerners living in the north and details both the beauty of African-American life in those early years and its gradual deconstruction in the subsequent decades. We are then taken back to Georgia as Rosemarie and her husband and children begin a new work in Atlanta during the height of the civil rights movement. In the final third of the book, the story pushes outward and inward exploring the edges of spirit, pain, wisdom, and mystery. It is impossible to finish reading this book with any assumption that you have exhausted it.

Remnants provides a unique perspective on the spirituality of liberation and resistance embodied in the southern freedom movement. It explores how those involved in that movement endured the inherent trauma of the struggle. It expands our understanding of the spiritual resources they utilized. Recent studies of the civil rights movement have explored its origins in the Black church. Rachel Harding however argues that African-American spirituality “had a source more profound than any anguished nineteenth century conversion to the faith of their oppressors.” Her mother’s witness is evidence of that assertion.

In an early section entitled “Ground,” the Hardings honor the witness and inheritance of their ancestors, descendants of slaves in the period between Reconstruction and the Great Migration. It was the experience of living close in time to those African ancestors and close in space to the ground upon which they landed that provided an intimacy of soul that they could continue to commune with. Ancestors and elders embodied the wisdom of the past and therefore required respect as a resource for survival.

Rosemarie recalls an automobile accident during her childhood. One of the adults was hurt and had to be taken to the hospital (if they could find one willing to treat them). The children were told to wait in the car for their return which they did. Harding interprets their obedient waiting as a metaphor for “remembering the will of the elders, now ancestors, and staying together on anxious ground.”

In the 1920s, the lessons of “staying together on anxious ground” carried the Freeney family north to Chicago; first in Woodlawn and later in Altgeld Gardens. Rosemarie’s memories here parallel the stories told in Isabel Wilkerson’s The Warmth of Other Suns. The close family relationships, both nuclear and extended, provided Rosemarie with a model of healthy community that continued to guide her in both professional social work and her later work with her husband in Atlanta during the early 1960s. It was in Chicago that Rosemarie first explored her gifts as a mediator and healer and began to understand that healing was an important form of activism.

It was in Chicago that Rosemarie became a Mennonite and then met her future husband Vincent, a history student at the University of Chicago. In 1961 soon after their marriage and at the request of Dr. King they moved to Atlanta to begin Mennonite House, an interracial community house working alongside and supporting the freedom movement.* Accompanying the healing work that Rosemarie had already been expressing, she now began to expand the hospitality she learned from her family of origin as a “central model for the meaning of activism.” For the rest of their lives, the Hardings would strive to create “spaces of refuge in the midst of struggle” where activists could come for refreshment, renewal, and reaffirmation. In these central chapters under the heading “South,” we read of Rosemarie’s many memories and observations of others involved in the freedom struggle, including Dr. and Mrs. King, Howard and Sue Bailey Thurman, Bernice Johnson Reagon, Gwendolyn Zoharah Simmons, and Ruby Sales. (There is a helpful catalog of “freedom movement colleagues and spiritual teachers” at the end of the volume.) There is a wonderful chapter on Koinonia Farm and the work of Clarence and Florence Jordan. Rosemarie offers significant interfaith reflections upon the spirituality of nonviolence as she explicates the global impact of the civil rights movement. For example, in her view the Christian spirituality of Clarence Jordan and the Buddhist spirituality of the Dalai Lama find common ground in their emphasis upon the transformative potential of nonviolence and compassion.

The final third of the book presents its “mystical heart.” It includes chapters on Rosemarie’s trip to India to visit the Dalai Lama in 1990. There is a detailed description of her year of severe illness with debilitating diabetes told in alternating perspectives between mother and daughter as they explore her pain and suffering and ponder the mysteries of health and healing. And in a powerful chapter titled “The Pachamama Circle,” the Hardings explore the “choreography of mothering.”

It was in the early 1990s that Rosemarie and Vincent originated a series of workshops they called “Remnants.” The concept underlying these retreats was that “God always leaves us a way out. Leaves us a way of hope. Leaves us with a way to recuperate.” Remnants is the perfect expression of Rosemarie Freeney Harding’s “spirituality of abundance.” It is this foundational belief in abundance that sparked her insatiable curiosity regarding the “life force” that provides for healing and transformation.

I am starting a list of twenty-first century spiritual classics. Remnants is my first entry.

*We should not overlook the difficult relationship the Hardings had with the Mennonite Church of their day. For more on this see the excellent article by Tobin Miller Shearer, “A Prophet Pushed Out: Vincent Harding and the Mennonites,” Mennonite Life, No. 69, 2015.

[This was a featured review on The Englewood Review of Books, July 9, 2015]